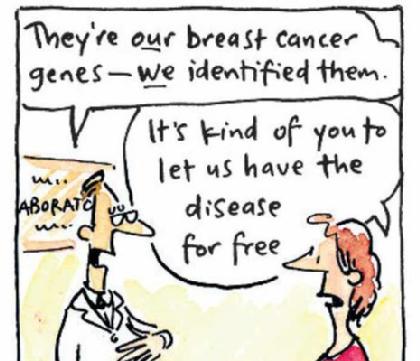 In initial days, this IPR regime was under huge criticism from ethical and moral firewalls which questioned how the right of commercial exploitation of resources can be rested at the hands of a selected few [link found here]. But the intensification of competition in industries (especially the biotechnological industry in this case) called for some sort of incentive creation for investment in research which came in the form of patents.

SCIENTIFIC DIFFERENTIATION OF FORMS OF DNA IN QUESTION

Genes as we have pointed out before are units of heredity. A gene is a segment of DNA that codes for a specific protein or set of proteins. In this article, we will talk about legal framework of gene patenting with respect to the following three forms DNA in its natural cellular environment, isolated genomic DNA, modified synthetic cDNA. Scientists have discovered methods of extracting DNA from its natural cellular environment which is later used for purpose of diagnosis through gene sequencing. This isolated genomic DNA is sometimes modified by splicing and removing the non-coding introns to make a DNA made of only exons. This kind of modified DNA is called cDNA and the same is used to express particular proteins by scientists in human body. The difference between isolated genomic DNA and cDNA is that there is human modification involved in the later while there is none in the earlier [link here].

The landmark decision of Diamond vs Chakrabarty in 1980- opened the floodgates for patenting of microorganisms where the judge ruled that human-made living matter is
. Anything under the sun made by man was considered to be patent worthy as long as they were not discoveries or manifestations of nature. The court clarified the threshold required for obtaining a patent as: “relevant distinction was not between living and inanimate things but between products of nature, whether living or not, and human-made inventions.”

“Thus, a new mineral discovered in the earth or a new plant found in the wild is not patentable subject matter. Likewise, Einstein could not patent his celebrated law that E=mc2; nor could Newton have patented the law of gravity. Such discoveries are “manifestations of . . . nature, free to all men and reserved exclusively to none.”

The United States Patents and Trademarks Office though seemed to have paid little attention to the limitations under the patent regime which in no way allowed patents to products of nature. The Patents Office undertook an expansive interpretation of law and went on to grant patents to a number of “engineered DNA molecules”. It handed patents for isolated DNA on the ground that since these molecules had been secluded from their natural cellular environment they were no longer “products of nature”.

This standing USPTO practice was challenged for the first time in a 2009 case against the grant of patents to Myriad Genetics. Myriad Genetics had after extensive investment and research discovered locations of BRCA 1 and BRCA 2 genes on the human chromosome which was landmark in the medical science. Mutation of BRCA 1 and BRCA 2 genes could lead to breast and ovarian cancer in women (it increases the chances of contracting breast cancer by 50-80% and ovarian cancer by 20-50% approximately according to case reports of Myriad Genetics vs. AMU). Though the scientific community was aware of threat of cancer from heredity, they were clueless as to the exact location of the BRCA 1 and BRCA 2 genes on the human chromosome. USPTO gave Myriad Genetics the exclusive rights to isolate these genes and carry diagnostic tests. The problem started when Myriad tried to enforce these patent rights against organisations which tried to test such gene mutation since they had an exclusive right over the isolation process which is an essential step in any diagnostic testing.

The case of Association of Molecular Pathologies vs. Myriad Genetics can be contextualised as a case of civil rights versus intellectual property rights. The company’s patents on BRCA 1 and BRCA 2 genes were ruled invalid on March 29, 2010 by Judge Robert W. Sweet in a U.S. District Court. On an appeal, the Court of Appeals for the Federal Circuit reversed the trial court judgment on July 29, 2011 and held that the genes were eligible for patents.

On December 7, 2011, the ACLU (fighting the case on behalf of petitioners) filed a petition for a writ of certiorari to the Supreme Court. On March 26, 2012, the Supreme Court vacated the Federal Circuit’s judgment and remanded the case for further consideration in light of Mayo Collaborative Services v. Prometheus Laboratories, Inc. in which the Supreme Court had ruled, just six days earlier, that more restrictive rules were required to patent observations about natural phenomena.

“Myriad did not create or alter either the genetic information encoded in the BCRA1 and BCRA2 genes or the genetic structure of the DNA. It found an important and useful gene, but ground-breaking, innovative, or even brilliant discovery does not by itself satisfy the §101 inquiry.”

“Ground-breaking, innovative, or even brilliant discovery does not by itself satisfy the §101 inquiry.”

On June 2013, the nine judge bench of the US Supreme Court ruled that: “A naturally occurring DNA segment is a product of nature and not patent eligible merely because it has been isolated”. However the Court went on to hold that manipulation of genes by human intervention to create something not found in nature (like cDNA) is patent eligible. The court emphasised on the “product of nature” exclusion used in previous judgments and also on Section 35 which makes isolated genomic DNA non-patent eligible but something like cDNA patent eligible due to significant human intervention in production process leading to change in nucleotide sequence.

Section 2(1)(j) of the Patent Act, 2005, defines the “invention” as a new product or as process involving an inventive step and capable of industrial application.

Indian Patents Act recognises patents only for inventions capable of having industrial application and not mere discoveries of existing inventions. The cross jurisdictional reference through successive amendments to Indian Patent Law can be linked to the US Patent law system of not granting patents to “products of nature”. Furthermore Section 3 of the Indian Patents Act lists out a set of inventions which cannot be patented due to negatively weighing in on policy considerations.

The 2002 Calcutta High Court case of Dimminaco AG vs Controller of Patents and Designs was the first in line of cases to question the legal provisions relating to gene patents. The company sought a patent on the process of preparing Bursitis vaccine where the final product was living organisms. The Patents office had denied patent rights to plaintiff grounding its reasons on the fact that such process couldn’t technically be considered a process of manufacture under the definition of invention under Indian Patents Act since the end product was a living product which they claimed was inherently a part of nature. The court overturned the Patents Office decision and remarked that there was no statutory bar on the patenting manner of manufacture even though the end product is living in nature. The Indian Patents Act was amended in 2002, to specifically permit among other things microbiological and biological processes.

Indian Patent law doesn’t recognise naturally occurring DNA to be patentable in any manner whatsoever due to provisions of Section 3(c) of Indian Patents which regards mere “discoveries” as non-patent eligible. Act 3(j) of Indian Patents Act which prohibits patentability of any form of animal or plant body is also relevant in this case.

Indian Patents office till 2013 allowed patents on isolated genomic DNA but Indian Biotechnology Guidelines of 2013 changed such a regime by treating such isolated material as mere “discovery” making them non-patent eligible under Section 3(c) of Indian Patents Act and also under Section 3(d) of the same legislation which can consider isolated DNA as “mere discovery of a new form of a known substance” which does not contribute to enhancement of the efficacy of that substance make them non-patent eligible again.

On patent eligibility of cDNA, it is argued to be a product artificially derived by man from work done on a naturally occurring substance. Indian patent case law doesn’t have enough precedent value although to determine the amount of alteration/deletion/moderation by human intervention needed to make modifications on objects of nature patent eligible. The primary question remains as to whether such levels of human modification takes cDNA out of the limitations imposed by Section 3(c), 3(d), 3(e) and 3(j) of the Indian Patents Act to make it patent eligible.[further analysis found here]

The question as a matter of policy thus boils down to balancing two major factors in the gene patenting regime i.e. incentivising of research and investments in research versus promoting public access to necessary healthcare. One of the ulterior objectives of the Human Genome project was to make information available to the general public at large. Expansive approach of reading patent laws has been seen to have wide repercussions leading to reduction of access to healthcare and research.

The need for incentivising research was one of the main reasons behind  introduction a liberal patent regime but the fact that in spite of large investments in research, mere discoveries or products of nature shouldn’t be made patent eligible is what should guide our jurisprudence of gene patents. There are other methods present in public domain to incentivise such landmark scientific achievements which are not patent eligible like grant of awards or subsiding costs of research. The advantage of these over granting patents is that they don’t intrude into public access to healthcare and research. The grant of individual property rights cannot supersede under any circumstances the basic civil rights of individuals.