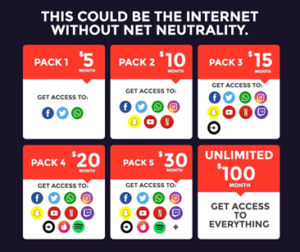 In Part I, I attempted to provide an overview of the ISP market structure, market players and associated economic phenomena. In Part II, we will be discussing the more specific topic of Net Neutrality and its intersection with economics.

Please note that over the course of the ensuing write-up, I have referred to two kinds of fees:

(i) Fee imposed by the ISP on the end-consumers

(ii) Fee imposed by the ISP on the content providers.

So, please pay close attention to the exact nature of the fee throughout the piece.

In an earlier 101 post, we discussed how the advent of Net Neutrality laws would restrict Internet Service Providers (ISPs) from imposing differential rates and therefore, such laws would be beneficial for Content Providers (CPs) that transfer higher than average amounts of data, such as Netflix. This is because in the absence of Net Neutrality, Netflix and the sort would have to pay a fee proportionate to the extent of bandwidth they use, as opposed to a flat rate.

Moving on, in Part I, we discussed the effects of the market structure on said flat rate. It’s to be noted that the flat rate (imposed on CPs, as opposed to end-consumers) shall tend to remain modest on account of ISP’s interest in courting a healthy inflow of content.  At the risk of stating the obvious, a higher flat-rate could alienate CPs of lesser financial might.

Apart from the above, note that the rate imposed on end-consumers will, also, tend to remain low on account of ISPs preferring to acquire returns from CPs, rather than the more mercurial end-consumer market. In other words, the two-sided market structure exerts a downward push on both the flat-rate imposed on CPs and end-consumers. [refer Part I, Demand Elasticity (Last Paragraph)].

The above analysis discusses purely the general economic phenomena effecting the prices as a consequence of the market being two-sided. There exist other ISP market specific variables and phenomena, discussed below, which affect price as well.

Sridhar V and Rohit P’s EPW article (reference provided below) suggests that the effect of a differential pricing system on end-consumers’ ability to afford services affiliated to the internet can’t be ascertained conclusively. In status quo, a modest flat-rate (payable by CPs) ensures a larger participation of CPs and consequently, payments (notwithstanding modest rates) from CPs could offset the negligible fee cast on end-consumers by ISPs. But if the fee is increased for certain CPs, those providers would want to recover their costs from consumers, though the ISPs’ customer fee might lessen. Therefore, it isn’t possible to make a conclusion with regards to the effect on the consumer’s ability to afford internet services, because of the difficulty in predicting the interaction between the various variables involved. Such variables would include the number of CPs, tendency of CPs to charge end users for services, et cetera.

Content on the internet, as we know it today, remains uniform across ISPs. Due to a modest flat-rate, almost every CP can access end-consumers of every ISP. But, in the absence of neutrality in pricing, compounded with the possibility of fee for CPs shooting up, financially weaker CPs mightn’t be able to afford being accessible on all ISPs, thereby, possibly leading to the fragmentation of the internet. It is argued that fragmentation isn’t ideal as it’s preferable to have a more information rich internet that is interconnected (e.g. hyperlinks) in the fascinating way that it is in today’s world. For instance, one wouldn’t be able to access certain links from a particular ISP as it mightn’t provide access to all content (refer here).

The ISP market in essence is an oligarchy. More specifically, a “bottleneck oligarchy”. The ISPs control, what experts call, the “last mile”. Essentially, they serve as the gate keepers of the internet for the end users.  ISPs hold the switch for enabling or disabling access of particular content to its end user. This puts them in a position of power ripe for exploitation.

It is very difficult to build competition in a market such as the ISP market because of the high initial costs for setting up infrastructure, the high switching costs (giving the early bird an enormous advantage) and finally the “network effect”.

The network effect works in markets where a product’s value to an existing consumer increases with every additional customer added (e.g. social networking sites). In order to better understand how more users of an ISP would increase the value of the ISP, let us consider a hypothetical situation. Imagine an apartment, where fifteen people use Comcast, while five use Verizon. Verizon will have to set up cables till the apartment for those five users. If Verizon were to acquire Comcast it could substantially reduce it’s per head cost to a greater extent, making it cheaper for the customer. This network effect creates a situation where companies aggressively seek to acquire other smaller competitors. Therefore, there is a high chance that there only remain a few competitors at the end, resulting in a monopoly, or an oligarchy at best. This results in a situation where there are only a few ISPs but several CPs. Therefore, an oligarchic ISP market further reinforces the imbalance of power between the ISPs and the CPs.

The above-mentioned power imbalance, as a consequence of the bottleneck oligarchy coupled with the network effect, allows ISPs to extort CPs. Therefore, having Net Neutrality laws are important to deal with this imbalance and the resultant anti-competitive practices. Regulation is especially important because ISPs might be providing other services [for instance, Alphabet provides both ISP (Google Fiber) and CP (Google search-engine) services] which might be in direct competition with services provided by CPs. (refer below for section titled “Vertical Integration”)

To briefly summarize, we have analysed the existence of a power imbalance between ISPs and CPs (as a result of bottleneck oligarchies and the network effect) and the potential for misusing said power imbalance in the absence of laws protecting Network Neutrality.

And finally, there is also the problem of vertical integration. Let us have a look at Google. Google started out as a CP, but over time, it has also entered the market of ISPs through its highly hyped Google Fibre. Where the ISP and the CP are either run by the same organization or by two organizations that are bound by an agreement, vertical integration is said to have taken place. In such a scenario, the absence of Net Neutrality rules would allow companies like Google to have an edge over other CPs and consequently deal in anticompetitive practices (refer here). For example, access to online markets involving Google’s creations could be easier than competitor’s products. In such a scenario, the only enforceable option would be to disallow Google (the ISP), from going into the type of content going through its cables. Furthermore, having a flat rate, disallows Google (the ISP) from discriminating against other CPs.

But of course, apart from laws ensuring Network Neutrality, the concerns raised regarding abuse of power imbalance could be dealt through Competition Law as well.

ISPs argue that CPs, such as Netflix, get a “free lunch” at their expense. In 2006, Verizon contended that ISPs, such as itself, put in a lot of capital into building infrastructure that allows access to the internet, while companies such as Netflix merely have to set up a server. Putting the burden on the end consumers for all the capital put into infrastructure would mean that ISPs will have fewer customers, as consumers are more sensitive to price changes than CPs. As a result, ISPs argue that CPs should be charged for this service because it makes more economic sense.

They take this argument further to claim that there is little incentive to expand their infrastructure if companies which take up a large of the bandwidth do not compensate them for the usage. They go further to claim that in the absence of improved infrastructure, it is those companies which require high quality services that will be affected the most.

Next, ISPs raise traffic management concerns against Net Neutrality. In a world where pressure on network infrastructure is increasing (i.e. congestion), where data transferred on the same lines has increased by four times over the course of five years (2010 to 2015), it is imperative for ISPs to improve infrastructure. Otherwise, there will be a drop in quality of service. And consequently, services which rely on high quality transmission will fail. For example, voice calls, which depend on quick transmission, will suffer in the present “best effort” system (Neutral Network). Consumers would naturally go for services which require a smaller bandwidth, because they will load faster.

Though this argument seems to be convincing, one must take note of the actual congestion of network at the moment, instead of relying on mere claims by the ISPs. If there is no congestion, there exists no need for traffic management or infrastructure improvement.

Additionally, there exists a counter-position that having Net Neutrality laws would disincentivize ISPs from investing in infrastructure. Herein, we need to understand the concept of “Artificial Scarcity”. As regards to this concept, the idea is that ISPs will always claim that the network is congested and the existing infrastructure is not enough. That way they will be able to justify traffic management and “Paid Prioritization” (faster access to CPs who pay up). So, even in a scenario where end users are able to properly access all CPs even in the absence of traffic management, they could fake scarcity in order to charge CPs for providing access. As a result of this, not only will smaller CPs not be able to compete, but effective cost for end users might also rise, leading to a part of the market being left out.

A continuation of this argument is that ISPs would want to maintain a condition of network congestion, so that they can continue charging CPs with a tariff. Otherwise, ISPs would have to expand their infrastructure in order to maintain quality of service and provide access to all CPs at the same time. In the absence of Net Neutrality laws, they have lesser incentive to do the latter. (Refer here.)

Furthermore, in a situation where a particular CP is pumping out large amounts of data, a convenient step for the ISP to take would be to remove that particular CP from the scene to relieve congestion temporarily, instead of the more appropriate, yet resource heavy task of improving infrastructure.

Hence, having Net Neutrality laws would incentivize ISPs to invest in infrastructure to maintain quality standards and disincline ISPs from indulging in stop-gap measures (discrimination on the basis of payment and traffic management).

To briefly recapitulate, we have analysed the issue by pitting the concerns of free lunch and increasing traffic against artificial scarcity.

After discussing the argument that it isn’t possible to conclusively predict the effects of Net Neutrality on end-consumer tariffs, we discussed the possibility of Fragmentation as a consequence of eschewing Network Neutrality.

Next, we discussed the inherent power imbalance between ISPs and CPs, in addition to allied concepts of bottleneck oligarchy, network effect and vertical integration.

Finally, we discussed the issues associated with arguments favouring greater traffic management in relation to the free lunch argument and the artificial scarcity argument.